A sophisticated investigation, an international media spotlight, and a historic government ruling to save thousands of dogs from brutal deaths.

How we stopped the cruelty and restored kindness:

The power of petitions: how to create a global call for change.

Bali is renowned internationally as an island paradise. But back in 2016—and for many years prior—a disturbing trade had flourished just streets away from busy tourist areas.

Every day, a large number of dogs were being captured from the streets of Bali, sold by their owners, or stolen from homes and businesses, to supply an unregulated and illegal dog meat trade. Estimates suggest up to 70,000 dogs were captured every year. However, because the trade operated without scrutiny, the true numbers are likely never to be known.

What we do know is that whether the dogs were beloved family pets or neglected and vulnerable dogs living on the street – all suffered terribly in this cruel trade. Many were poisoned on the street or beaches. Others were brutally caught, muzzled with tape, tied up and shoved into bags to await their fate. Some were kept like this for over 24 hours before being  strangled, or clubbed to death.

These sad practices – fueled by lack of education, poverty, by the tradition of some ethnic minorities from other parts of Indonesia, as well as international tourism – were not only inflicting terrible suffering on dogs but were creating significant health and safety risks for tourists and locals alike. Handling and consuming dog meat poses the threat of cholera, trichinosis, rabies, and other illnesses.

We had to shine a light on this shocking situation. By infiltrating a dog meat gang, we brought an end to the unspeakable cruelty… 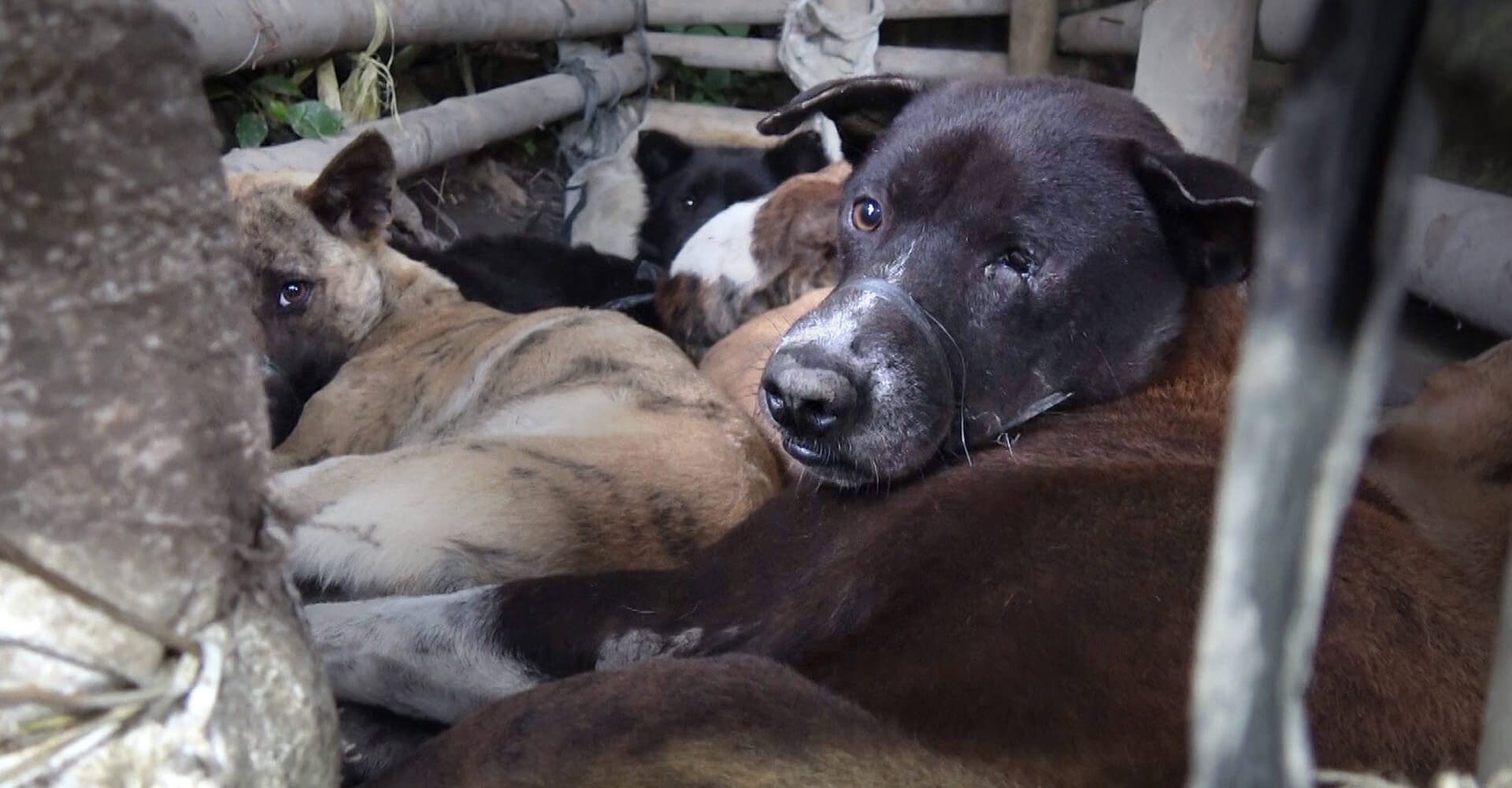 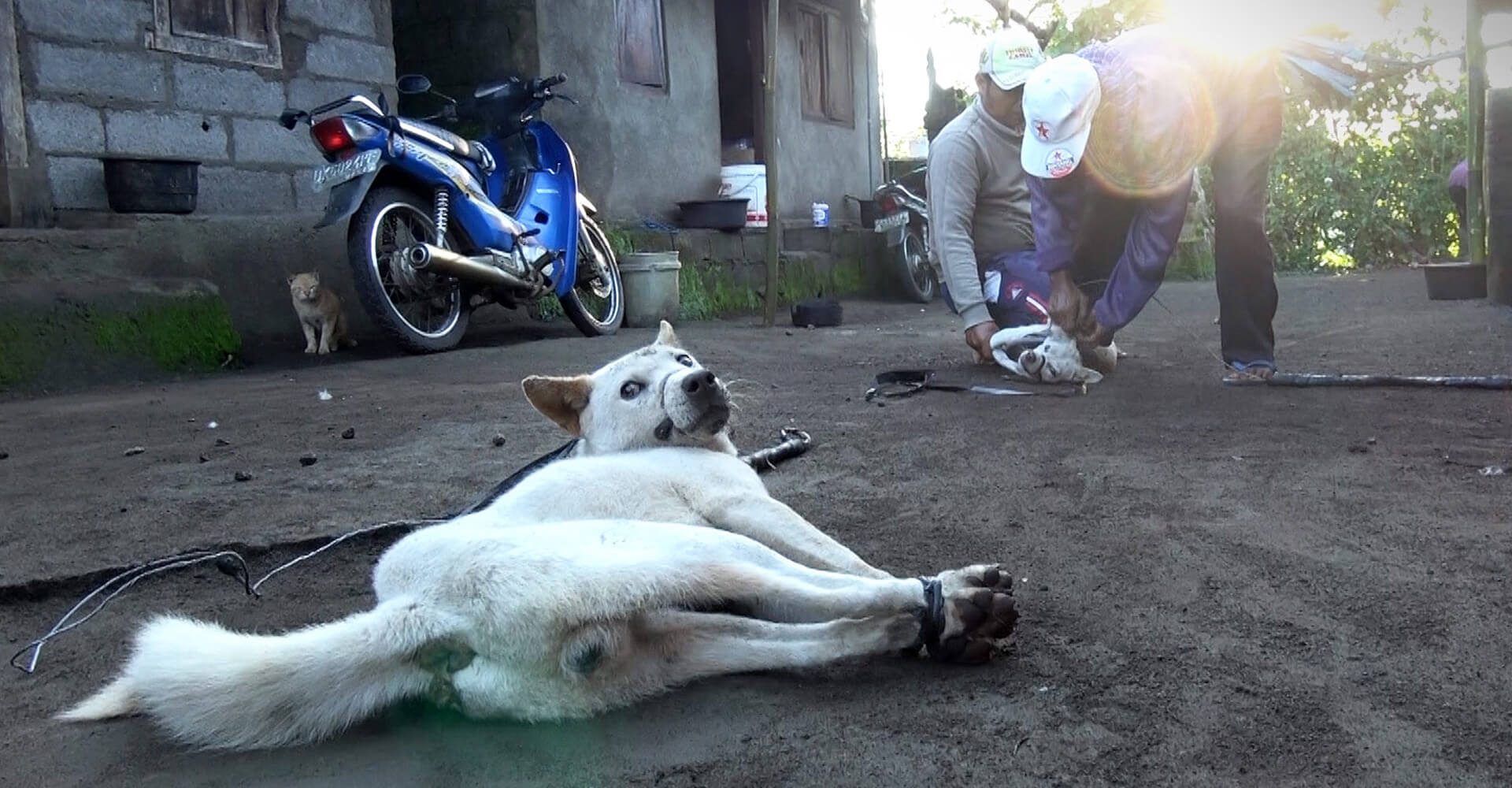 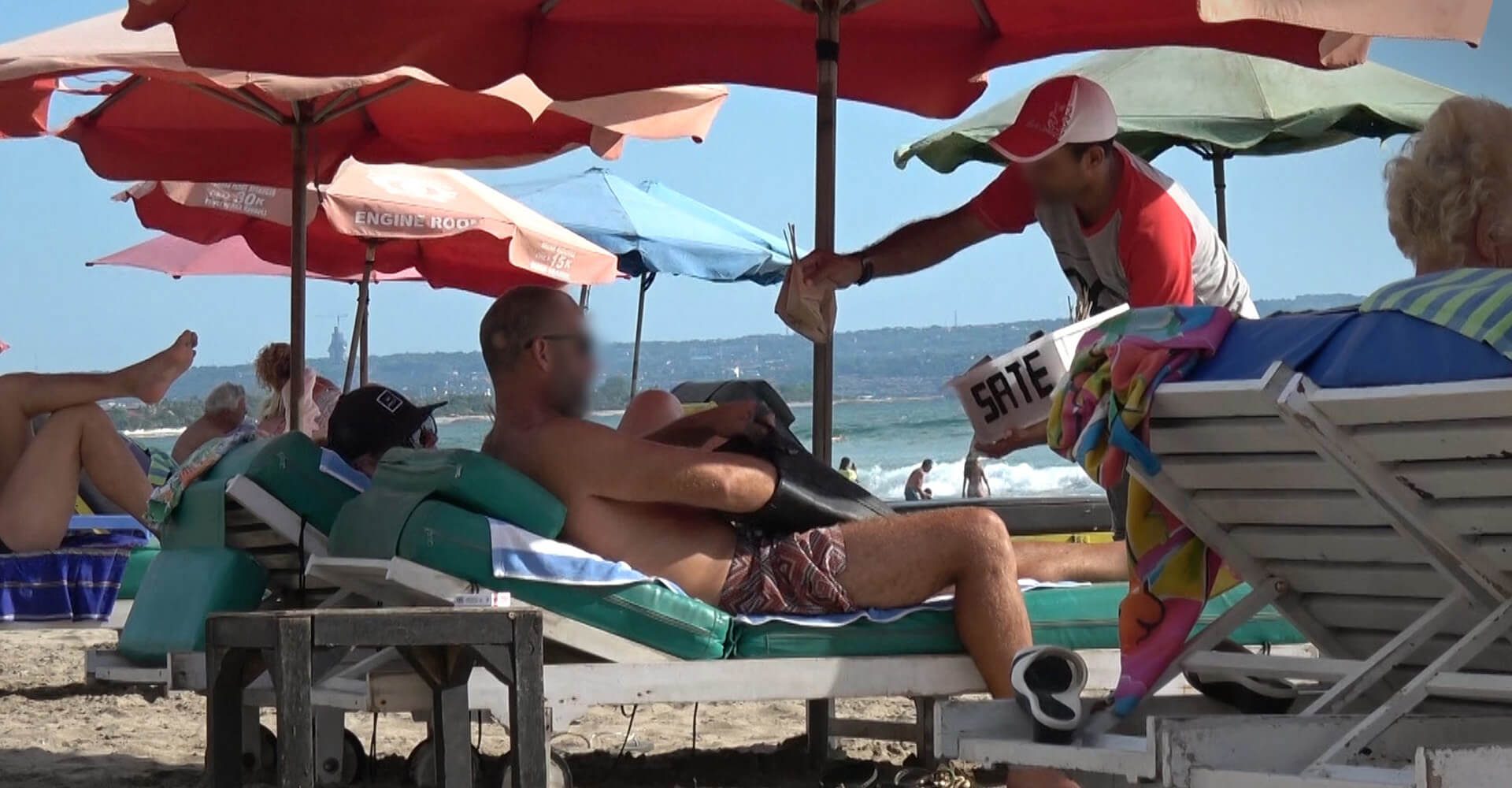 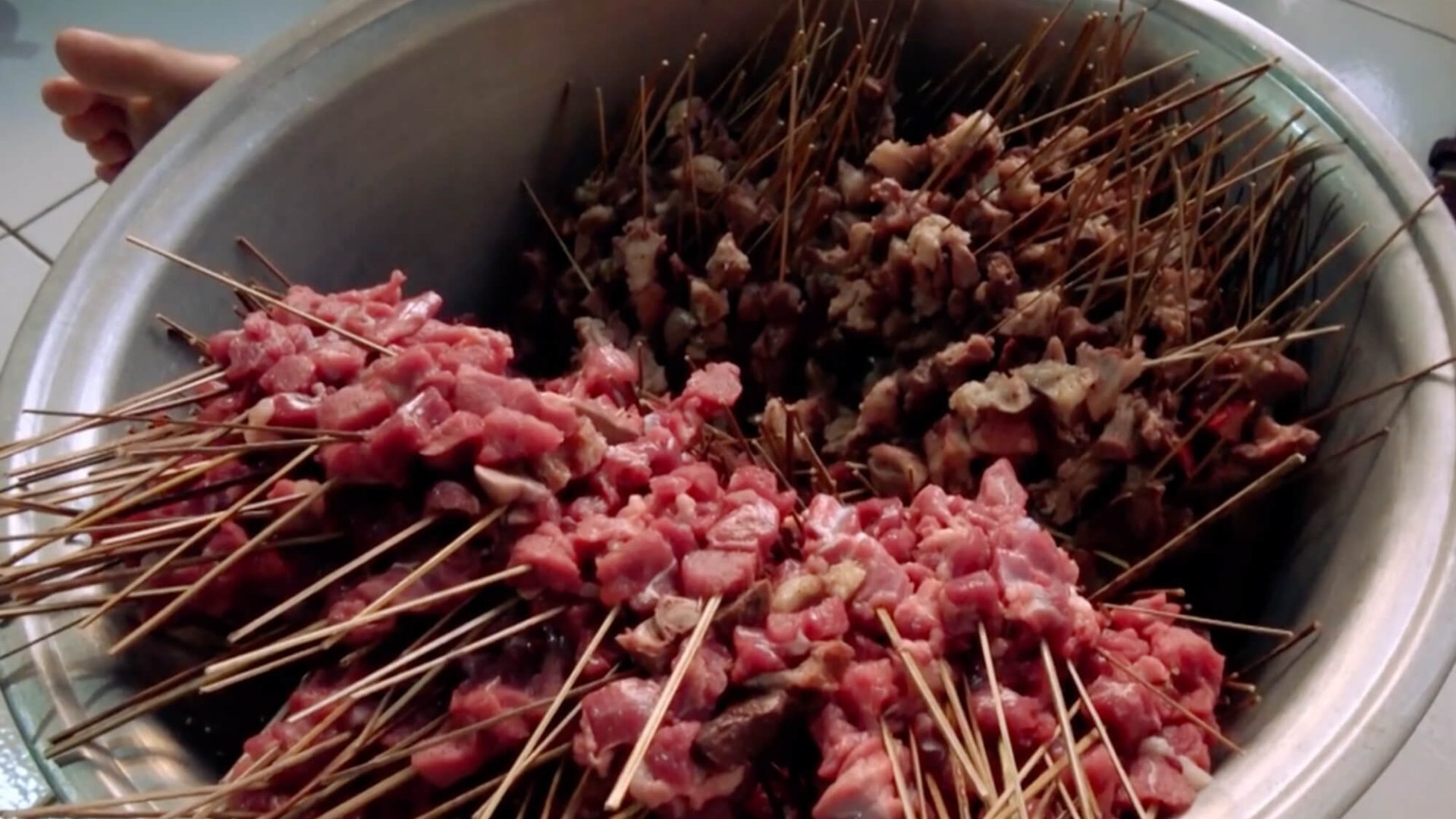 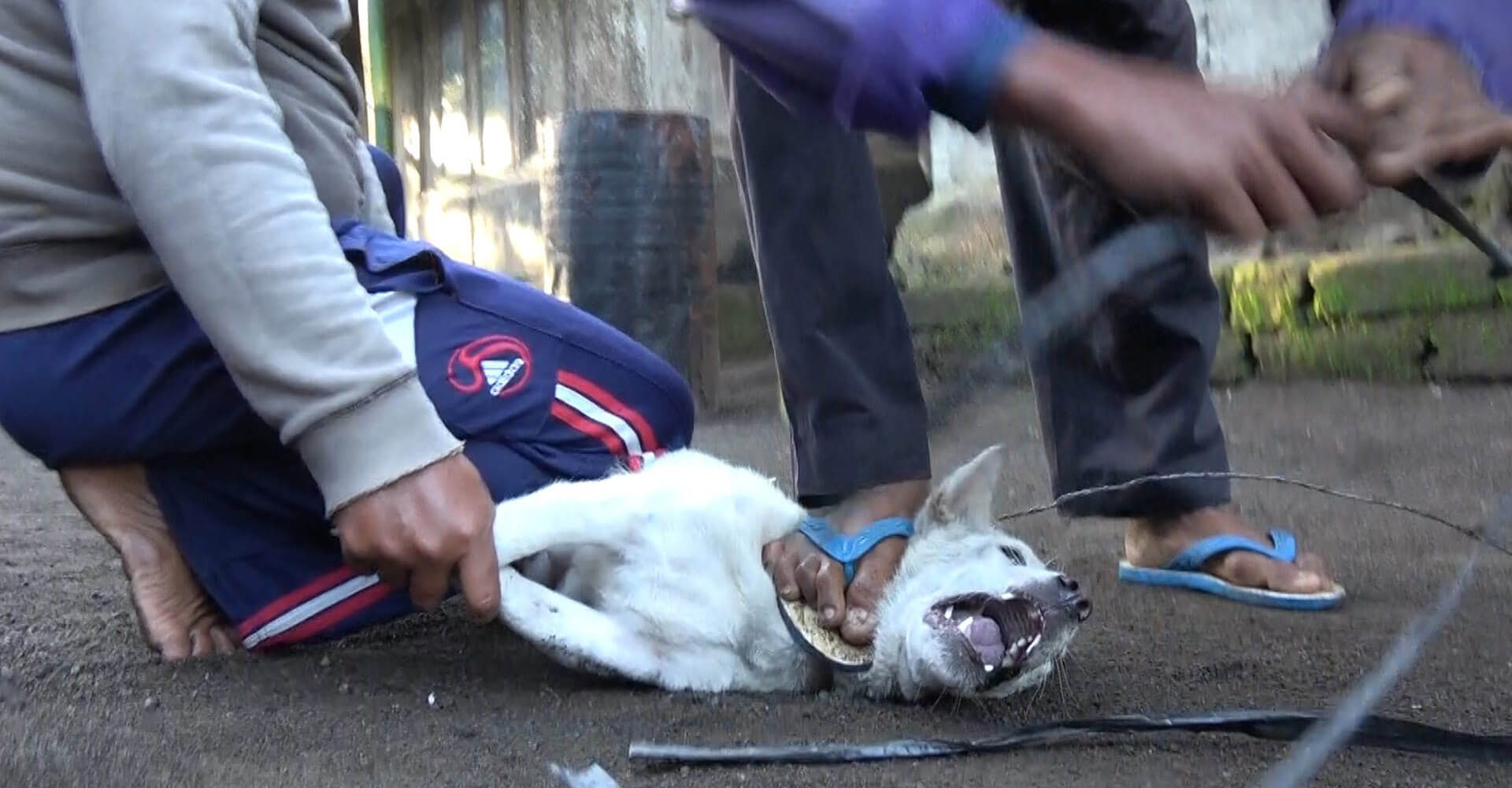 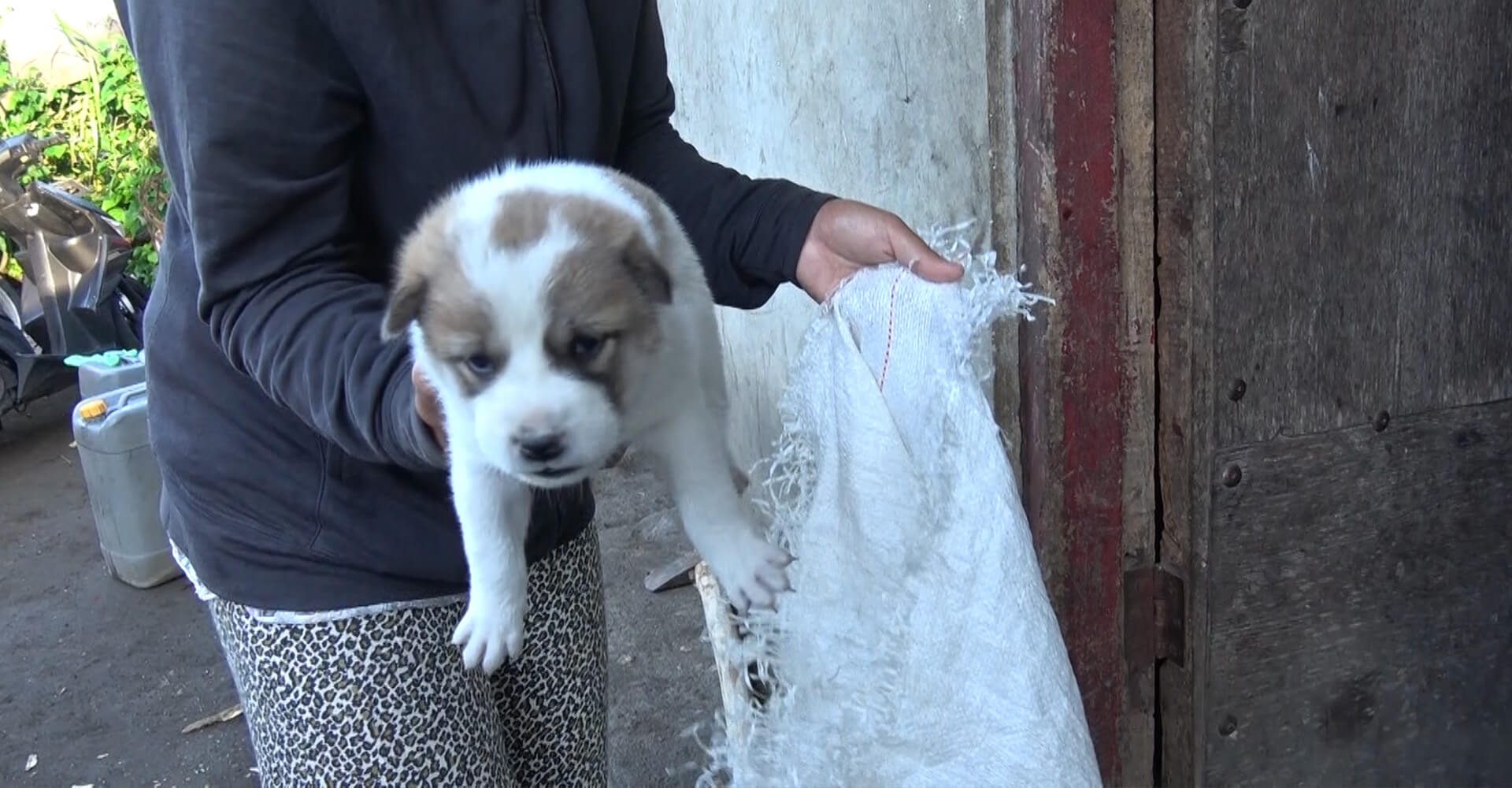 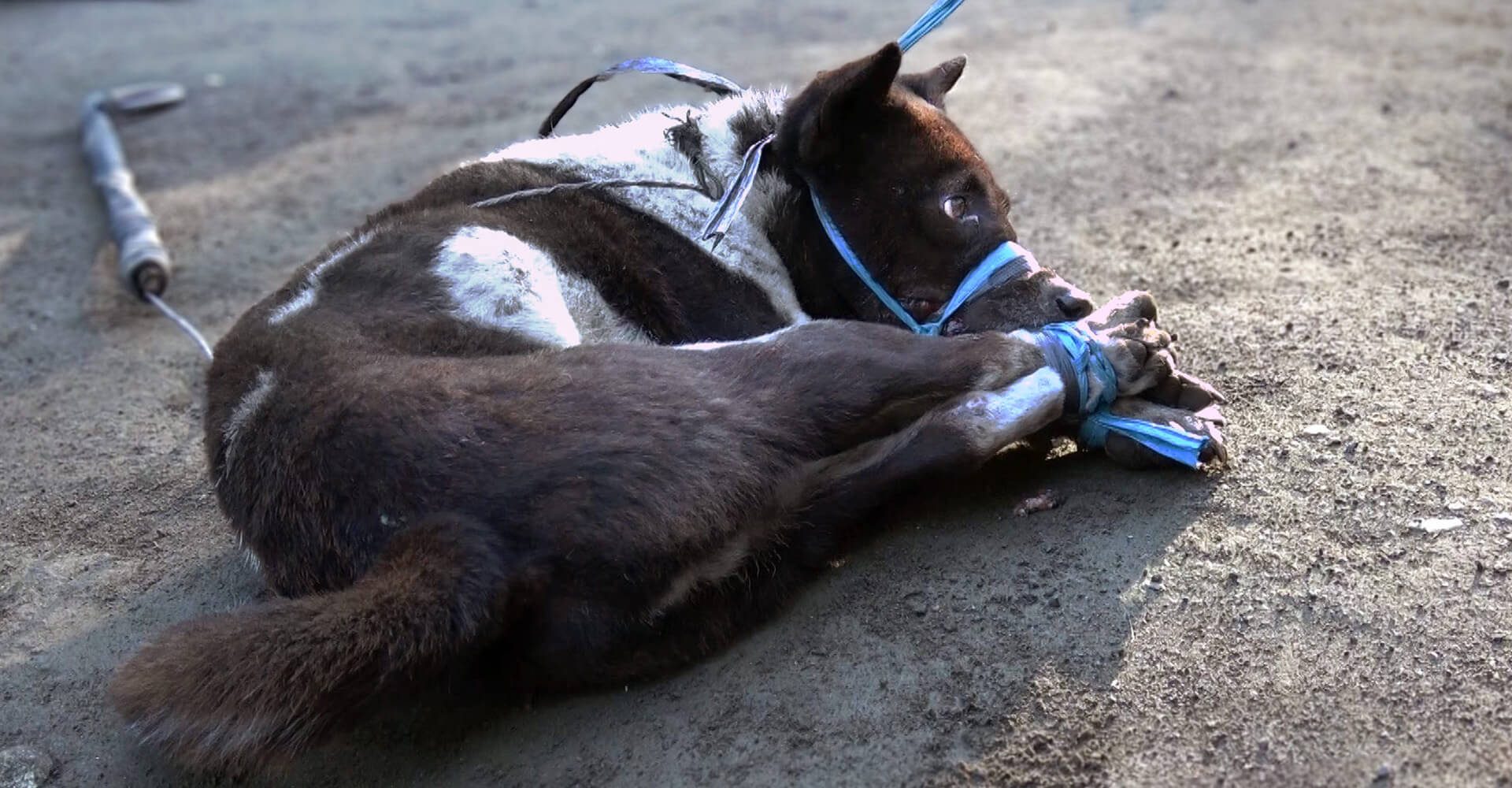 Through hard, undeniable evidence, we were able to shut down the unregulated dog meat trade and its inherent cruelty. Around the world—and for all animals—investigations are a powerful tool to progress effective laws, increase protections, and promote kindness and awareness.

Conducting a sophisticated investigation and connecting with international media outlets.

Over many months in 2016, our team members went undercover to infiltrate the dog meat trade in Bali. Under the guise of a documentary film crew interested in showcasing local cuisines, we were able to record the terrible cruelty suffered by the dogs.

While the experience was almost unbearable to witness, our evidence proved crucial in ending these disturbing practices.

When the story broke, our investigation was referenced by hundreds of leading news media outlets around the world. The dog meat trade was extensively discussed on television, in print and digital media, and more.

With international tourism playing a crucial role in Bali’s national GDP, the pressure of a glaring, global spotlight proved the necessary catalyst for change. Political leaders were formally calling for kindness despite years of denying the illegal dog meat trade. 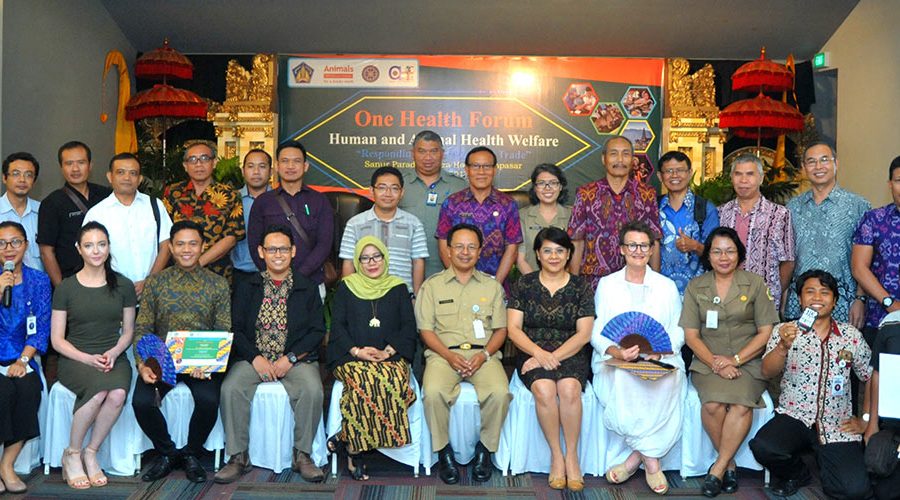 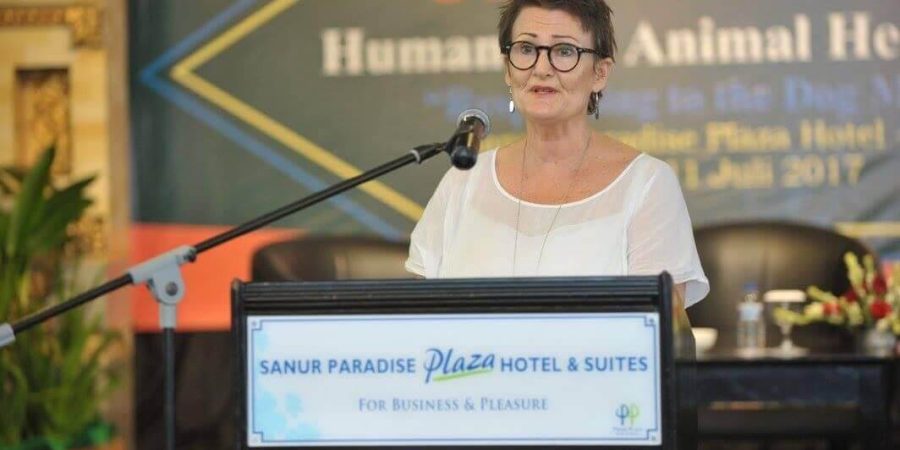 In response to our evidence about the dog meat trade, Bali Governor Mangku Pastika issued a Circular Letter to all Regents and the Mayor of Denpasar in June 2017 to acknowledge the dog meat trade in Bali for the first time. He warned that the trade needed to close, requested data on the trade to be collected and that monitoring and education be undertaken to prevent the sale of dog meat.

Previously, the very existence of the trade had been met with widespread denial by authorities, despite years of campaigning by a variety of animal welfare groups. 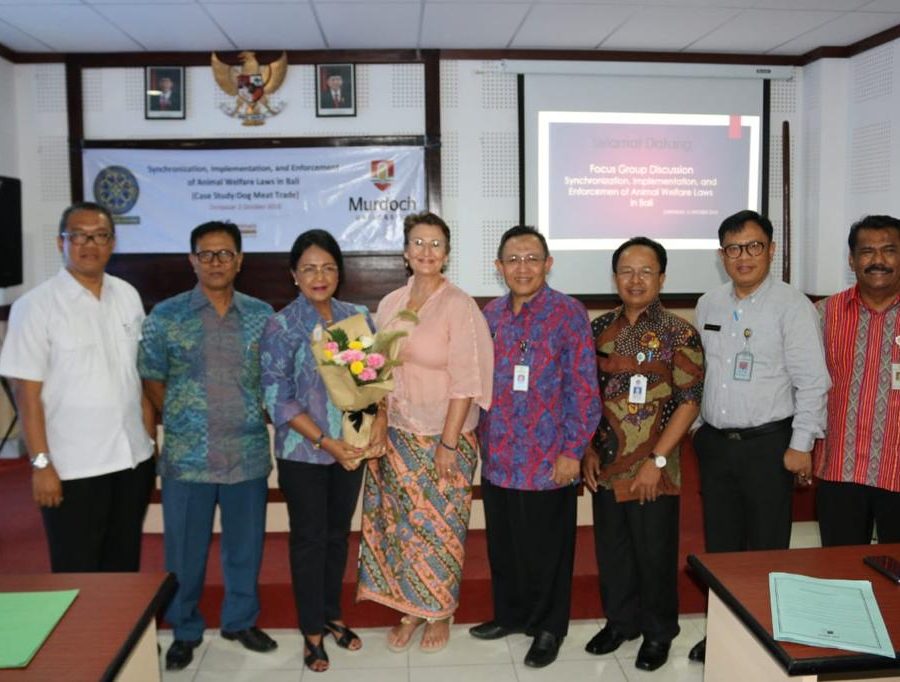 This marked change in government sentiment and perspective was achieved through our investigation, and respectful dialogue with the government that was supported by research, evidence, and analysis. We also worked with Udayana University veterinary and law schools in Bali.

Our world-first research and experience in Bali has been presented internationally by our Bali vets, including to a veterinary science forum at the Australian and New Zealand College of Veterinary Scientists. These forums enable us to share our learnings and increase awareness of the trade, including the dangers it poses to animal welfare and public health.

Our research and analysis

Collaboration and negotiation to help animals, and people.

For the Hindu majority of Bali, eating dog meat or participating in the trade is very much against Hindu laws. Indeed, Bali’s unique street dogs had co-existed peacefully with the local people for hundreds of years.

Balinese Hindus believe dogs play an important role in their way of life. The lore of Yudhistira and his dog in the Hindu epic of Mahabharata symbolises this sacred relationship when Yudhistira refuses to enter heaven without his loyal dog. This sacred story is still often told and is used as evidence of the special relationship between the Balinese and their dogs.

Our investigation not only sought to end the suffering of dogs killed for their meat, but to help restore this unique and special relationship.

We undertook a series of complex and respectful briefings and negotiations – from the highest levels of government in Bali to community and religious leaders to health and education professionals and businesses.

Securing support for the historic decision to outlaw the dog meat trade is a reflection of the progress that’s possible for animals when people from all walks of life come together with open hearts, open minds and a determination to create change.

Find out more about Animals Australia’s approach to collaborations. 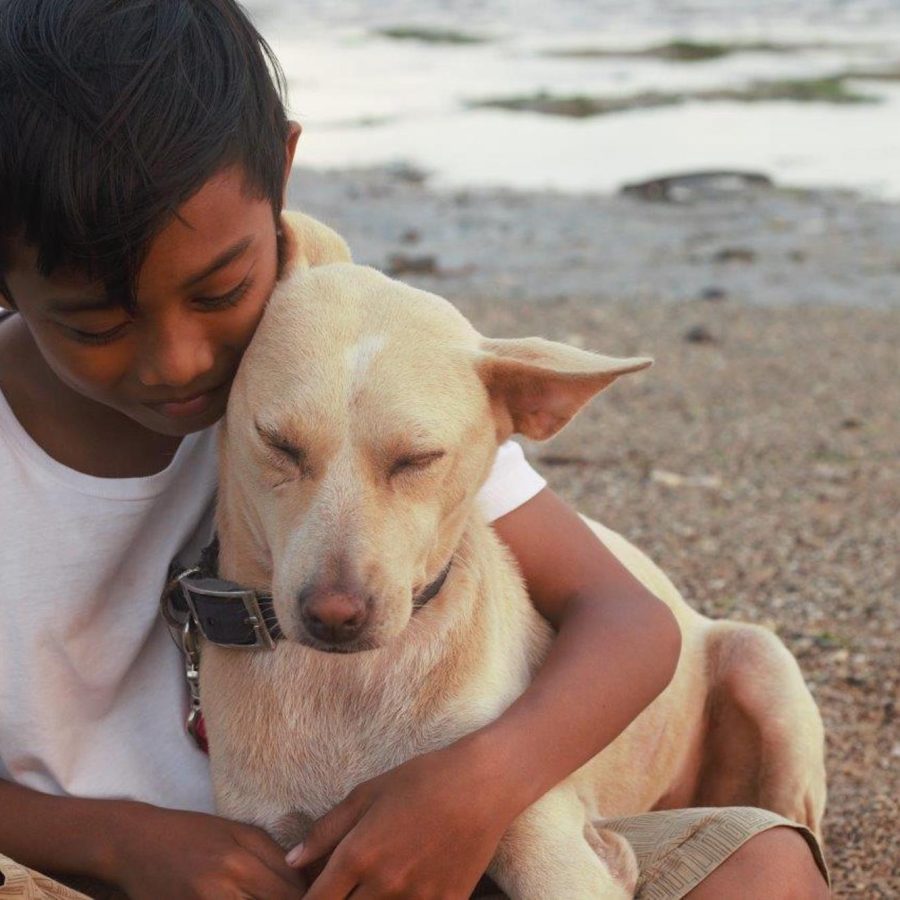 A kinder future for all animals in Bali.

With international tourists – especially from Australia – unwittingly fueling so many issues for animals in Bali, our ethical responsibility to the local people and animals extended far beyond the dog meat trade.

We have maintained a strong presence in Bali and our Balinese team works tirelessly to make Bali a kinder place for animals and people. This includes helping educate children about animal welfare and importantly, to improve the lives of farmed animals.

What we’re witnessing in Bali is not so much a cultural shift as a conscious return to the practice of ‘ahimsa’ — or nonviolence — that is intrinsic to Hinduism, Bali’s predominant religion.

“How could they see these beautiful dogs as food in Bali?” was a question many of us asked. Then the inevitable realisation kicked in — we too have been raised to think of certain animals as nothing more than food.

This ‘wake up’ call led to thousands of people around the world undertaking an ‘internal audit’ and seeing ‘food’ animals in a whole new light.

Our world grows both richer and kinder whenever we value animals for who they are — not what their bodies can produce.

Our investigations into the dog meat trade have again reinforced the risks faced by animals — be they dogs, pigs, chickens or cows – when they are seen as nothing more than a food source. All love life, all fear harm. All feel. The good news is that by making conscious, compassionate choices we can create a kinder world for them all. 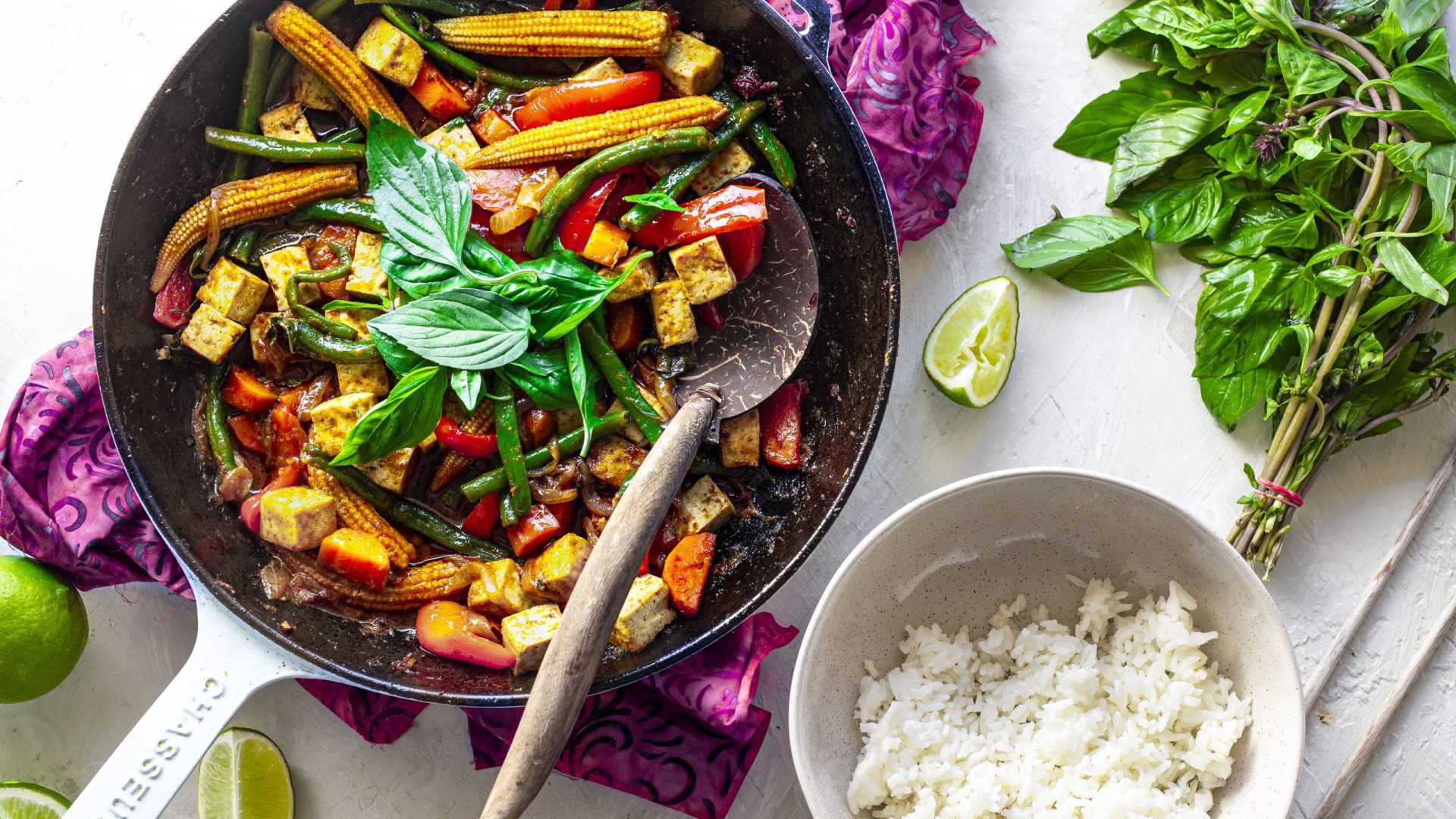 It's never too late  to make a kinder choice.

Enjoying more plant-based meals is the most profound way to promote kindness for all animals, for the environment, and even for yourself—there are plenty of proven health benefits in exploring a new way of eating!

When you spread awareness, you cultivate kindness.