Urge Germany to spare animals from the horror of live export

I have just learned that countless German animals are still suffering terribly because of live animal exports.

Calves, mere weeks old, are trucked along European roads for days on end. They are not up to the strain. Their immune systems are weak. They cannot be properly fed, so they suffer terribly from hunger and dehydration. And yet Germany persists in exporting around 650,000 calves every year.

After being 'fattened' in other EU countries, many of these calves will end up being exported to non-European countries, where investigations repeatedly reveal them suffering prolonged and agonising slaughter.

And it's not only calves. Germany also still sends thousands of animals directly to North Africa, the Middle East and Turkey, despite the fact it has been known for years how the animals will most likely be killed. Eye-stabbing, tendon-slashing and fully-conscious slaughter are common. These animals take a long time to die, and suffer every moment.

Live exporters cannot be allowed to circumvent laws, again and again, in order to make this suffering possible. I urge Germany to take a compassion stand and end live export.

Minister Klöckner, I also respectfully ask that you do everything in your power to encourage an EU-level ban on the export of all European animals, to spare them from the horror of live export.

Torn from his mother just weeks after birth, he was sold to the live export trade — beginning an arduous journey that ended horrifically in Lebanon.

This young calf was born on one of the vast green fields of Northern Germany. From such an idyllic beginning — his short life would be filled with fear and suffering.

As a male 'dairy' calf, he was seen as nothing more than a greedy waste of his mother's milk. So, he was taken from her, and loaded onto a truck with other 'useless' male calves, to be transported to a collection point in Belgium.

By law, he and his young companions should have been granted 48 hours rest, to be fed and cared for — however, the reality is that time and industry pressures most often result in no time being 'wasted' looking after the wellbeing of baby animals who have little financial value.

So instead of receiving the care he needed, this bewildered and starving calf was illegally transported to Spain the very next day. There, investigators lost his trail — only to pick it up again in horrific circumstances months later, as he struggled for his life on the bloodstained floor of a slaughterhouse in the Middle East.

He was barely eight months old when our investigators found him in Lebanon — he had been 'fattened up' and exported again before reaching his final destination. A slaughterhouse is a terrifying place for any animal, but his ordeal was particularly brutal. Like most animals exported live from Europe, he suffered through the fear and pain of having his throat cut while fully conscious.

This is the reality of the global live export trade — an industry that sends animals halfway around the world just to be killed for their 'meat'.

Germany's involvement in this callous trade is to supply it with arguably the most vulnerable of animals... babies. 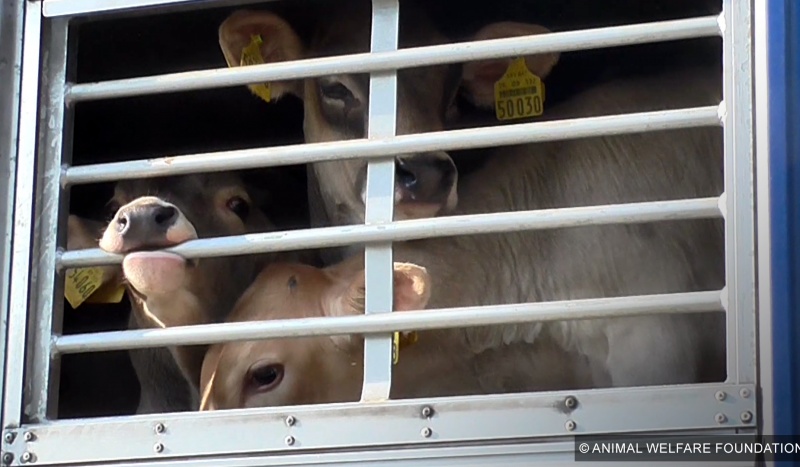 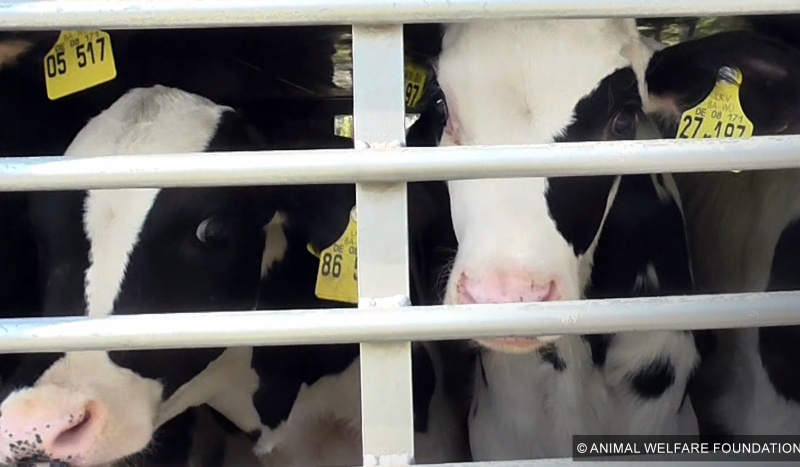 These calves are the 'invisible' victims of Germany's dairy industry »

Germany is Europe's largest milk producer — but to hold this 'record', it needs many dairy cows. That, in turn, means calves — for without a baby a mother cow can produce no milk. Many of the 650,000 infant male calves exported by Germany to other European Union countries every year will end up victims of the live export industry.

Our investigation partners at the Animal Welfare Foundation have documented the fate of Germany's 'unwanted' calves for years. These young animals, who should still be under the care of their mothers, are very susceptible to illness and disease, and — with their ravenous appetite for their lost mothers' milk — cannot be properly fed or looked after on long export journeys, and suffer terribly.

Live export becomes a stress and endurance test for these babies. Hungry and thirsty, crowded and exposed to extremes of temperature — from boiling summer sun to deadly blizzards — not all these calves will survive. Given the fate that awaits them in slaughterhouses, the calves who die en route might be called the 'lucky' ones...

If the calves leave Germany, their trail will run cold. Countless numbers of them end up outside the EU, exported to countries where no animal welfare laws protect them.

And it's not just calves. Despite investigations repeatedly exposing the brutal and fully-conscious slaughter of 'breeding' animals who are shipped to North Africa, the Middle East and Turkey, Germany persists in exporting thousands of animals directly to these countries every year, inflicting horrific animal suffering year after year.

We must unite to end the suffering of all animals forced into live export.

So, together with the Animal Welfare Foundation, we now call on the German Federal Government to take a compassionate stand against extreme cruelty, and support an EU-wide ban on the export of live animals.

Germany will hold the EU Presidency in July 2020 — there has never been a more powerful time for them to lead the way to a kinder future, free from live export.

TAKE ACTION: In the name of this young bull, please urge the German Federal Minister for Food and Agriculture, Julia Klöckner, to end the cruel export of live animals.