He was stabbed in the eyes.

I call on the Government of Brazil to protect animals from prolonged and agonising cruelty by ending Brazil's involvement in the global live export trade.

This Brazilian bull has already been beaten, stabbed and crippled. But the worst is yet to come…

This mahogany bull grew up on the rich green pastures of Brazil—but his young life was cut violently short in a filthy slaughterhouse on the other side of the world.

In the process of transferring him from holding pens to the slaughter room, he was stabbed in the ears and eyes, and his leg tendons were so severely slashed that the blade cut right to the bone.

With his full weight bearing down on his ruined legs, this gentle giant crumpled into the dirt. From there, a hook designed to hang carcasses was forced through his delicate nose—and this terrified, one-tonne animal was dragged towards the kill floor.

Even crippled as he was, the pain in his face was worse, and he forced himself to crawl on bent and broken knees, following that dragging chain inside the Egyptian slaughterhouse—where his final torments began.

This is the brutal reality of live export.

His last moments were spent in a blood-splattered room full of flashing knives. Pain-filled cries echoed off concrete walls and stray dogs scavenged from piles of entrails tossed aside in the dirt.

Will YOU join the global fight to free animals from live export cruelty?

Each year, the Brazilian live export industry sends tens of thousands of animals to share this terrible fate. Crammed by the hundreds onto ships, they'll stand amongst their own waste for weeks. If they get sick or injured—as many do—there isn't even a vet on board to help them.

Then, once they arrive in importing countries, there are no laws to protect these animals from extreme brutality. Because when it comes to live export—cruelty is an accepted part of doing business. 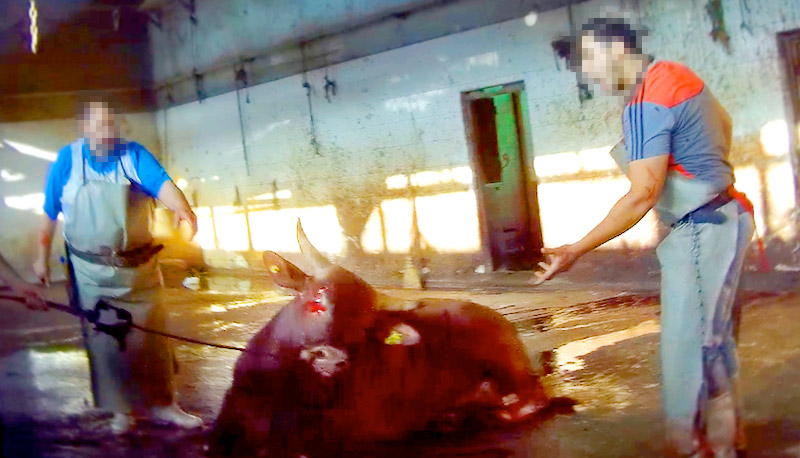 Dignity is stripped from everyone involved in this horrific trade—human and animal alike. Poorly trained and frightened slaughterhouse workers are forced to put aside their humanity—and the animals must endure the horrific consequences. All fall victim to the live export industry's quest for profits.

Caring people the world over are demanding that their governments take immediate action to protect animals from this unspeakable torture. As a major player in the cruel live export game, Brazil has an incredible opportunity to spare tens of thousands of animals from suffering.

TAKE ACTION: On behalf of the mahogany bull, please sign this petition calling on the President of Brazil, Michel Temer, to end the cruelty of live animal export.

BREAKING NEWS! The Federal Court in São Paulo, one of Brazil's major live export ports, has prohibited the export of live bulls, cows and steers. The decision, by Federal Judge Djalma Moreira Gomes, is in response to the damning evidence of serious animal cruelty exposed by Animals International — alongside a public civil action filed by the animal protection group, Fórum Animal.

It’s inevitable that exporters in Brazil will fight to retain their trade. So your signature on this petition is more critical now than ever. Please help us demonstrate to Brazil’s President that caring people the world over want an end to this trade in animal misery.